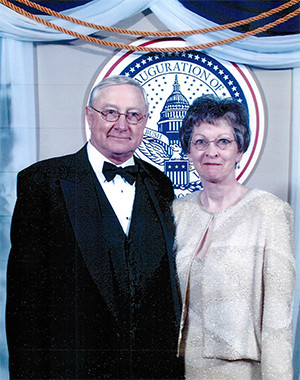 Helping the community in any way they can is the goal for Marvin and Sandy Clark and the main reason the two started a fund with the Washington County Community Foundation in 2006.

"It's a good thing," Marvin said of the WCCF. "It's a great way to help and hopefully, the Foundation will find a way to help future generations in Washington County."

The Clarks set up a Touch Tomorrow Fund with no designations so the money can go toward any area that is needed.

"We don't know what the needs will be in the future," said Marvin. "The bigger the government gets, the more things will have to be locally funded. That's where the Foundation comes in."

Marvin serves on the Foundation's board of directors and has enjoyed getting to know more about the program and helping others become more educated about what the WCCF does.

"If everyone works together, it will make a difference," he said.

In fact, he encouraged his Salem High School graduating class of 1957 to start a fund that would award grants to teachers to help with classroom projects. He said he enjoys being able to help teachers with projects they don't get money to do in their classrooms.

Education is important to Marvin and Sandy. All four of their children are college graduates and that is something both are very proud of.

"We've always tried to treat all of our children the same," said Marvin. "We helped them all out with college . . . we didn't hand them anything, but we did help them."

Their oldest daughter, Melinda, is a nurse practitioner; Melanie is a paralegal; Marcy is a second-grade teacher; and Marvin Jr. is in sales.

"We are so proud of all of them," said Sandy. "And they all are great about helping each other out."

Marvin added, "That's the greatest reward we can have."

Marvin and Sandy met while in high school and were introduced by Marvin's niece, who was a good friend of Sandy's.

Marvin said he can even remember their first date.

"We went to the movie theater in Bedford," he said.

Marvin was born in Washington County on June 9, 1939, to Samuel Ellsworth and Minnie Shields Clark. He was born at home.

"But my dad told him he didn't do anything, he just cut the cord," said Marvin. "He told him a house call was $2 so he'd give him $2 for coming by. The doctor took it."

He said he always got a kick out of that story and the fact that his dad didn't want to pay the doctor $6.

Marvin grew up in Salem and graduated from Salem High School in 1957.

Sandy was born on September 21, 1943, to Floyd and Frances Trueblood Fletcher, Jr. She was born in Washington, Indiana, and her family moved to Salem when she was two years old. She was also a graduate of Salem High School, graduating in 1961.

The two were married in June of that same year and shortly after, Marvin went into the Army, where he spent the next three years of his life. In fact, he was in Korea when their first daughter, Melinda, was born on September 11, 1962.

"I didn't get to see her until she was seven months old," Marvin said.

He said he received three telegrams about the birth. He was thrilled to receive the first one and thought he'd have a heart attack when he received the second.

"I was just sure something was wrong!" he said.

However, it turned out that there was a small typo in the first telegram, so they resent it with a correction.

When he returned from Korea, he was stationed in Colorado Springs, which is where they started their young lives together.

While working full-time as a realtor and raising four children, Sandy decided to go to college and earn a degree. She graduated from Indiana University Southeast with a Bachelor's in general studies in 1994, the same year their son graduated from IUS.

To celebrate being done with paying for college, Marvin, Sandy and Marvin Jr., took a trip to London, England.

Marvin said they had been paying money out to IUS for so long, he thought they should name Highway 60 in his honor.

"He put five us through college!" said Sandy.

Marvin worked for Hardin Farm Drainage for 23 years and then went to work for Salem True Value for 16 years before retiring. In 1982, a hobby of his turned into a side business, Clark Cutlery, in which he began producing Limited and Special Edition knives for groups, organizations and individuals around Washington County.

His collectibles produced for sale to knife enthusiasts include the three-knife set of the Washington County Courthouse, the annual Old Settlers' Days knives dating from 1982 to 2001; the three knife set that included the Stevens Museum, John Hay birthplace and pioneer village and the three knife set for the county schools and many more.

Clark Cutlery also carries many brand name lines, a selection of maker knives and his own line of Clark Cutlery Knives.

Sandy was a real estate agent for many years and works in the human resource department for Brinly-Hardy Company in Jeffersonville, Indiana. She will retire at the end of 2011.

Sandy was a member of the Washington County Board of Realtors, Society of Human Resource Management and is actively involved in the Salem United Methodist Church.