The Washington County Community Foundation flourishes and provides funds for numerous worthy causes because of the many generous benefactors who contribute to it.

Martha Smith Branaman is one of the many foundation benefactors who have created an enduring legacy of funds for specific charitable interests that will benefit the community of Washington County for years to come. 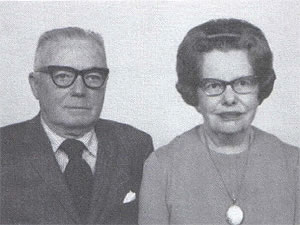 During the 1990’s, Martha Smith Branaman contributed the proceeds of the Baynes and Lyons farms that she and her late husband, Clarence William Branaman, had owned to both the Washington County Community Foundation and the Christian Church Foundation. By placing the two Branaman farms in a charitable remainder trust, Martha Branaman ensured a continuing source of funding for charitable interests that she was able to specify. Additionally, the charitable remainder trust provided a source of personal income for Martha until her death in August 1997.

Both Martha and Clarence Branaman were natives of Washington County. Clarence was born in Jefferson Township, the son of the late W. Floyd Branaman and Alice Stewart Branaman. He was a 1920 graduate of Salem High School. He attended Purdue University in West Lafayette, Indiana, and graduated with a degree in agriculture in 1924. In 1925, he became a teacher of agriculture and Future Farmers of America sponsor at Salem High School. He was a pioneer in introducing scientific agriculture to Washington County, and he very successfully farmed a large acreage of land north, northeast, and west of Salem.

Martha Smith Branaman was born in Salem, Indiana in 1910. She was the daughter of the late Ford A. Smith and Florence Blanche Munkelt Smith. Her father, Ford Smith, was the founder of Smith Cabinet Manufacturing Company. Martha graduated from Salem High School in 1928. She met Clarence Branaman while at Salem High School, and they were married in December 1928. They had two children - David Branaman (1932) of Louisville, KY and the former President of Salem’s Child Craft Industries, Inc. and Martha Ann Branaman Gran (1937) of Indianapolis, IN.

Although Martha Smith Branaman did not attend college, she was an excellent student, completing the courses and credits necessary to graduate from high school before the second semester of her senior year. She remained an avid reader, crossword puzzle guru, and lover of history throughout her life. For those who remember her, she was also one of the most prolific letter writers in Washington County, never missing an opportunity to congratulate, console or keep in touch with her friends, family members, and fellow churchgoers throughout the community and the county.

Both she and Clarence were community-minded people who contributed their time and money to helping others. They were active in their church and in various community organizations. Martha was a former director of Smith Cabinet Manufacturing Company and an active member of Tri-Kappa, Study Club, and Fortnightly Club. She was President of Christian Women’s Fellowship and served on the Board of Directors of the First Christian Church of Salem. Clarence was an active member of Fortnightly Club and SAR. He was President of Lion’s Club and Master of the Masonic Club. He was also active in the church, serving as a Deacon and on the Church Board.