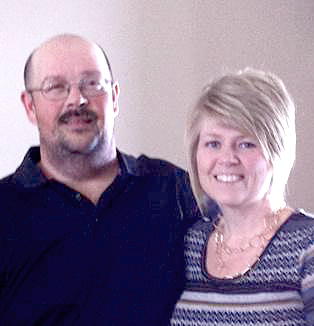 In life, there are many lessons that people learn quickly. Things like not to touch a hot stove after you have been burned, not to treat people disrespectfully, and the list goes on. However, there are equally as many lessons that must be learned and understood over a lifetime. Sometimes they start in childhood and aren’t fully realized until later in one’s adult years. And still yet, not everyone appreciates that process. However, Amy Birkla was not one of those people.

Amy was born to Jerry and Linda (Searcy) Haffield on August 15, 1974 in New Albany, Indiana. She had one stepbrother and one stepsister. She grew up in a subdivision in her hometown of New Albany for many years. But when she turned 13 years old, her family moved to the small town of Bradford, about thirty minutes away.

Although the distance was not substantial, the move was not at all easy for a young girl entering into her teen years. Amy remembered, “It was quite an adjustment to go from living in a subdivision in town to living in the middle of a cornfield in rural Harrison County.” Leaving behind friends and places that she knew and trading it all for an environment and people that were completely unfamiliar presented a challenge. However, Amy said, “I was raised to be an independent person. During my youth…my independence…served me well.” So, while it took some time, she eventually became acclimated to the small-town atmosphere that surrounded her.

As she moved into her high school years, Amy began working at a few part-time jobs to make some extra money. One of those jobs was at the Greenville Mini Mart. During the time she worked there, there was a young man who frequented the aisles of the small store. Because it was a small-town, it did not take long for people to get to know one another. After multiple times of him coming through the store, Amy discovered that his name was Everett, but he went by EC. He lived in town, not too far from her country home in Bradford.

The longer Amy worked at the store, the more the two young people got to know each other. Eventually, they began dating each other for several years. During that time, Amy graduated from high school and began attending AIB classes (The American Institute of Banking) at Jefferson Community College in Louisville. Through those courses, she studied the various facets of banking, later going on to earn diplomas for Consumer Banking, Commercial Lending, and General Banking. As she reflected back on the early years of her career, she said that, just as it had in her youth, her independence and self-drive served her well in the industry, helping her to become successful.

Fast-forward a few years and Amy married her high-school sweetheart, EC Birkla, in 1996. Several years later, the couple welcomed their daughter, Ella, into their family. They also have four dogs that they consider family, too!

Despite the difficult move when she was a child, Amy grew to enjoy living in the country and she and EC decided to raise their family in Fredericksburg, just a short way from where they grew up. They live on an 11-acre myriad of all kinds of fruit and nut trees. They enjoy gardening and raise several chickens and even “one unruly rooster!” As a family, they attend services at Northside Christian Church in Amy’s hometown of New Albany.

As Amy grew older and became a wife and a mother, one of those lessons that are learned over time began to evolve more and more. She began to see a shift in how she approached life and the sense of independence that used to guide her actions. She thought about how, as a young person, the cultivated sense of having to be independent often “influenced [her] to stick to [herself] and not seek out others for companionship.” While in some regards that proved beneficial, she said, “As I became older, I learned that there are times when it is ok and even necessary to lean on others. It isn’t a sign of weakness to need others and in many cases it strengthens bonds when a person reaches out for help.” The lesson that many fail to appreciate is that there is value in listening to people who have been through things you have not and walked down a different road.

When she learned this lesson, she found a new appreciation for what was instilled in her as a child. But, she said, “[While] I still believe strongly that it is important to be able to take care of yourself and not rely on others to take case of basic needs, having a shoulder to lean on or confidant to share experiences with can make a person that much stronger which is a lesson I hope to share with my daughter.”

Along with this lesson, Amy also realized that it is important not only to have those people you can turn to, but to also be that person for others; to help by sharing experiences, talents, and resources with those around you. In order to help do this, Amy established a fund with the Washington County Community Foundation. Through the fund, she will be able to pour into the community that she loves. Although she may not be able to be that personal confidant for every person in Washington County, through her generosity, she will be able to make it a better place for generations to come.